Accueil - Focus on the Winners

Focus on the Winners 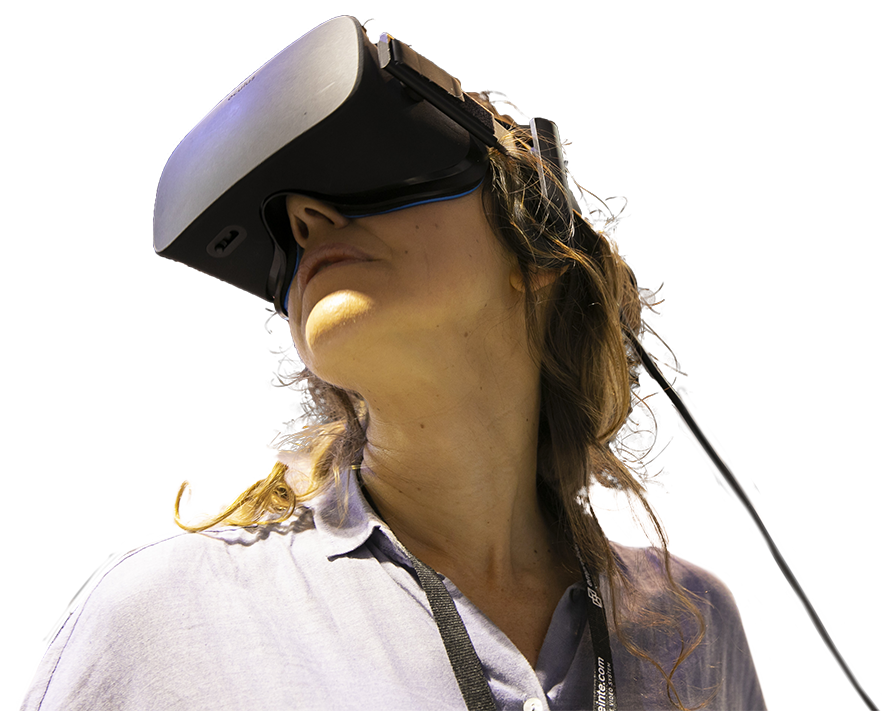 The 360 Film Festival invites you each month with an interview of one of the winners.

My Identity is this expanse! 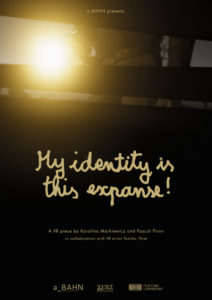 This month, we invite you to discover the interview with the creators ofMy Identity is this expanse! : Karolina Markiewicz and Pascal Piron.

360 Film Festival : Can you tell us about the genesis of the project? 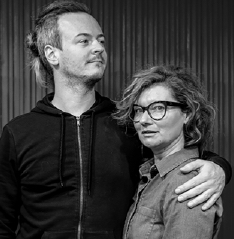 Karolina Markiewicz and Pascal Piron : The starting point of My identity is this expanse! was Les Formidables and Mos Stellarium – our feature-length documentaries telling the stories of several young immigrants and refugees, our students – who had to make their respective journeys through Syria, Pakistan, Palestine, Iran, Turkey and the Balkans, some in closed vegetable boxes stowed on or in trucks. Some of these young people were consultants for this virtual reality project, notably Christina Khoury or Yunus Yusuf, but also the Syrian author Wajdane Nassif and the humanitarian doctor Dr Raphaël Pitti.
It was crucial that My identity is this expanse! be told from the point of view of a child or adolescent, that it be transposable to the stories of other children, without any particular nationality, historically decontextualised, because there have been and still are many children in forced exile across all continents.
The main idea of My identity is this expanse! was to be able to reflect on the documentation of violent events and more dreamlike memories through the specific filters of the children’s world. We also wanted to highlight what culture means to them and how imagination and even poetry can help them to become resilient, just as many of them are.
360FF : How did you approach the writing of the screenplay with the poem?
KM & PP : It all started with the poem, the words, their images, but also the rhythm. We were also interested in the learning of a poem by the children. How this learning takes place and what it means for the future of this child – this person. 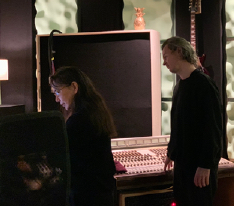 360FF : The place of the spectator forces him or her to remain enclosed to give the work its full meaning. A difficult challenge for an interactive work but one that works perfectly. How was the sound environment thought out and created to immerse the spectator?
KM & PP : The greatest moment in the creation was indeed devoted to the sound, its accuracy, its qualities and its spatialization. We tried a lot with the sound engineers of Sonic Invasion. It is a composition in itself of all the sound elements. Of course, the composition of the soundtrack in different layers by Kevin Muhlen, with the interpretation of one part by Nataša Grujović were a perfect foundation. The idea was to stand between the violent events and Mahmoud Darwich’s poem, evocative of memories and dreams, to create an additional nuance. We wanted to lock the participants in and show them the essential, but above all to make them experience the inner world of a child in this situation. This world comes through sound a lot.
360FF : Voice casting is very important. How did it go? 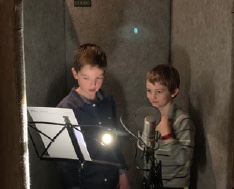 KM & PP : We like working with the same actors, especially Elisabet Johannesdottir and Jules Werner – their interpretation is more accurate and their work sought after. We also work with professional and non-professional actors: children and adults from different backgrounds and origins : Edi and Leo Hudson, Lara Windeshausen, Maja Clement, Christina Khoury, Catherine Elsen, Pitt Simon, Khalid Abubakar.
360FF : What was Yunus Yusuf’s reaction when he lived the immersive experience that was inspired by his own life?
KM & PP : He was touched, this world belongs to his past, he shared it generously with us and now with you. Today, he is proud to have moved forward. He has just finished his studies in economic and social sciences. 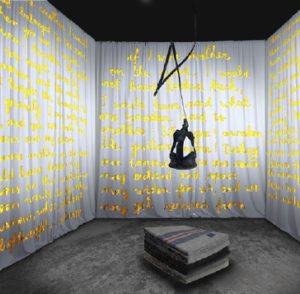 360FF : Can you give us a few words about the installation that accompanies the work?
KM & PP : It is both a prologue and an epilogue to the experience – different levels of perception of these painful and meaningful stories.
360FF : What are the next projects?
KM & PP : We have just finished a feature-length documentary, a road movie with Holocaust survivors accompanied by teenagers: The living witnesses. We are also laying the groundwork for a new virtual reality project on the Zeitgeist, that particular pandemic era in which we all find ourselves today and from which it is good to think further ahead. 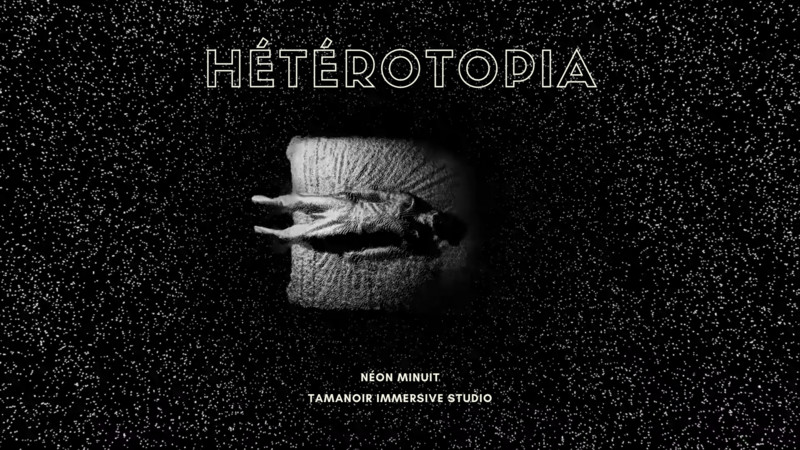 This month, we invite you to discover the interview of the HETEROTOPIA creators: Léon Denise, Samuel Lepoil et Dorian Rigal.

360 Film Festival: Can you tell us about the genesis of the project? 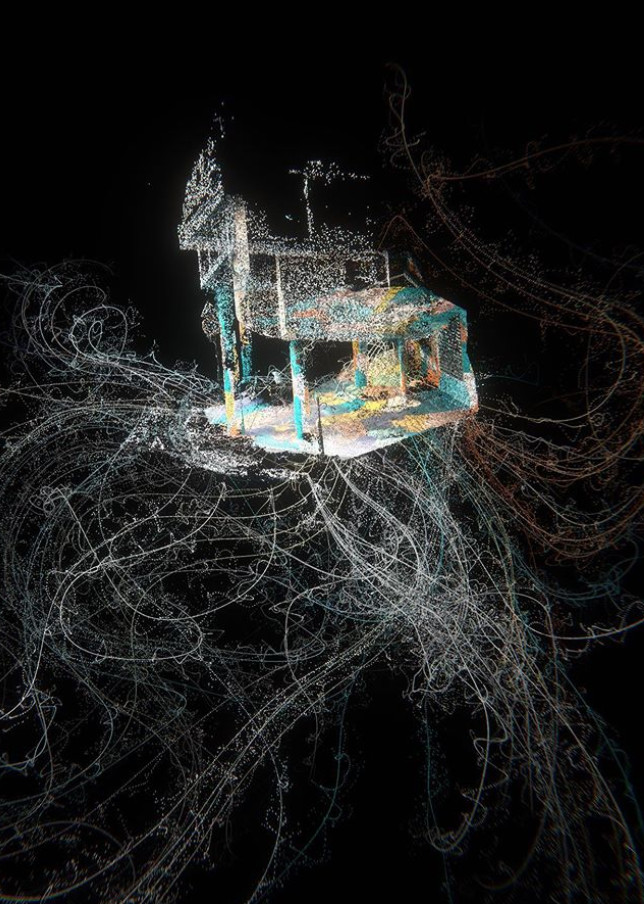 Dorian Rigal & Léon Denise: This project is the result of a series of graphic research we did with Néon Minuit between 2018 and today. We went to see Tamanoir to produce together a project that could have both the narrative dimension of the film and the sensory experience of space allowed by virtual reality. The initial idea is to bring the body back into virtual reality. This dialogue between real and virtual guided us throughout the conception of Heterotopia. It is this dream of getting behind the screen, of becoming one with the digital experience.
360FF: The love story between the two architects, where does it come from?
Samuel Lepoil: In order to best serve our questioning of the real and the virtual, we wanted to take creation itself as our subject. To do this, talking about two architects made it possible to make concrete through the creation of a model the search for the absolute and its failure which characterises creativity. We took a lot of inspiration from the love story between Camille Claudel and Auguste Rodin to finally transcend it and thus speak of a couple who fall apart by creating together. 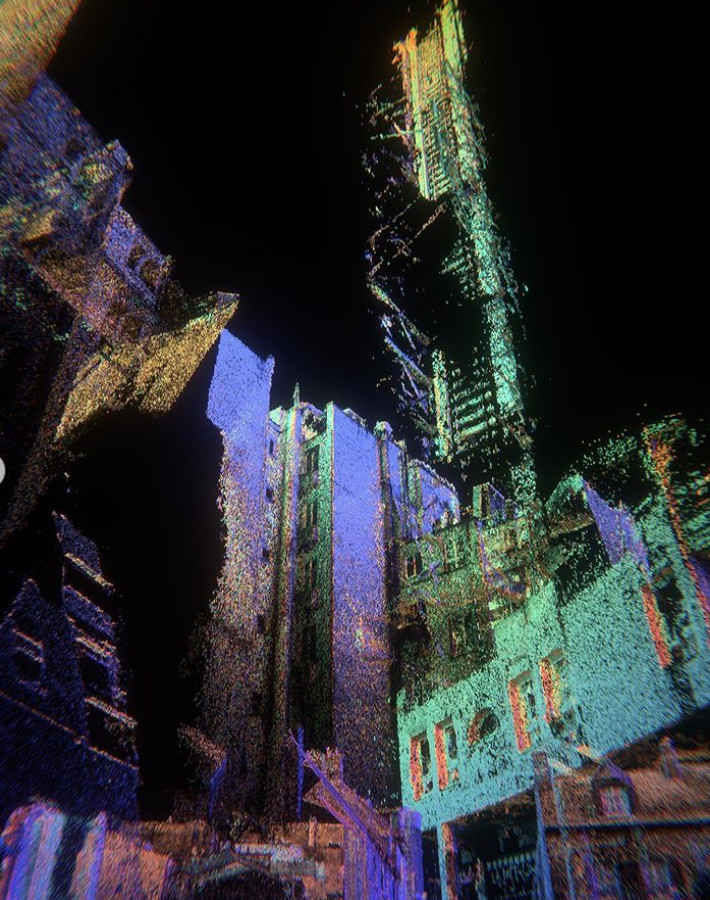 360FF: Architecture is one of the characters in the work. Why did you use / promote this art?
Dorian Rigal: We wanted to create chimeras of buildings made up of scans of real places. For a long time, there has been 3D on one side, photography on the other, fiction on one side and reality on the other. Photogrammetry bridges all these worlds. Here the theme of the work is replayed from a technical point of view: the encounter between utopia and reality. Focusing on the photogrammetry of buildings also means talking about an imaginary that is contemporary to us: that of the city.
360FF: What was the reason for using Kinect? 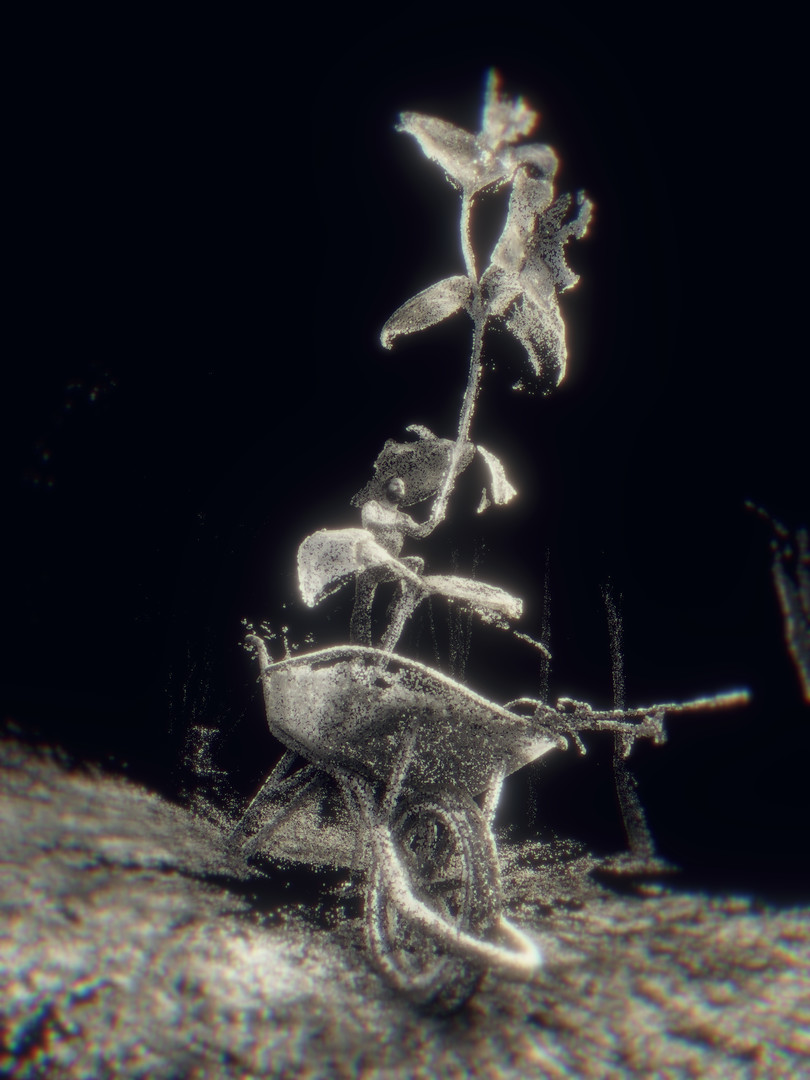 Dorian Rigal & Léon Denise: Our first project as a collective was to connect the bodies of the performing arts in a virtual world. The Ether project (2018) features a tightrope walker interacting with the Kinect and its digital double in a virtual landscape. We have since continued to develop these tools.
The impulse around the potential of the current device was triggered when we synchronised the real space captured by the Kinect in the virtual space of the VR and thus interacted with the real from the virtual.
New sensations appeared when we were able to interact in the VR with a real table filled with various objects and materials. Touch becomes accessible to VR and becomes a new medium for the experience.
360FF: Can you explain the steps involved in creating interactivity?
Samuel Lepoil: We started with a contemplative project. The further we progressed, the more we wanted to involve the user’s body in the experience. Speaking of architecture, it soon became clear that we had to place this theme at the centre of interactivity by allowing the dialogue between body and décor. The table in the architecture studio, supporting a model, made it possible to concentrate the interaction in the play space while allowing the user to modify large spaces. 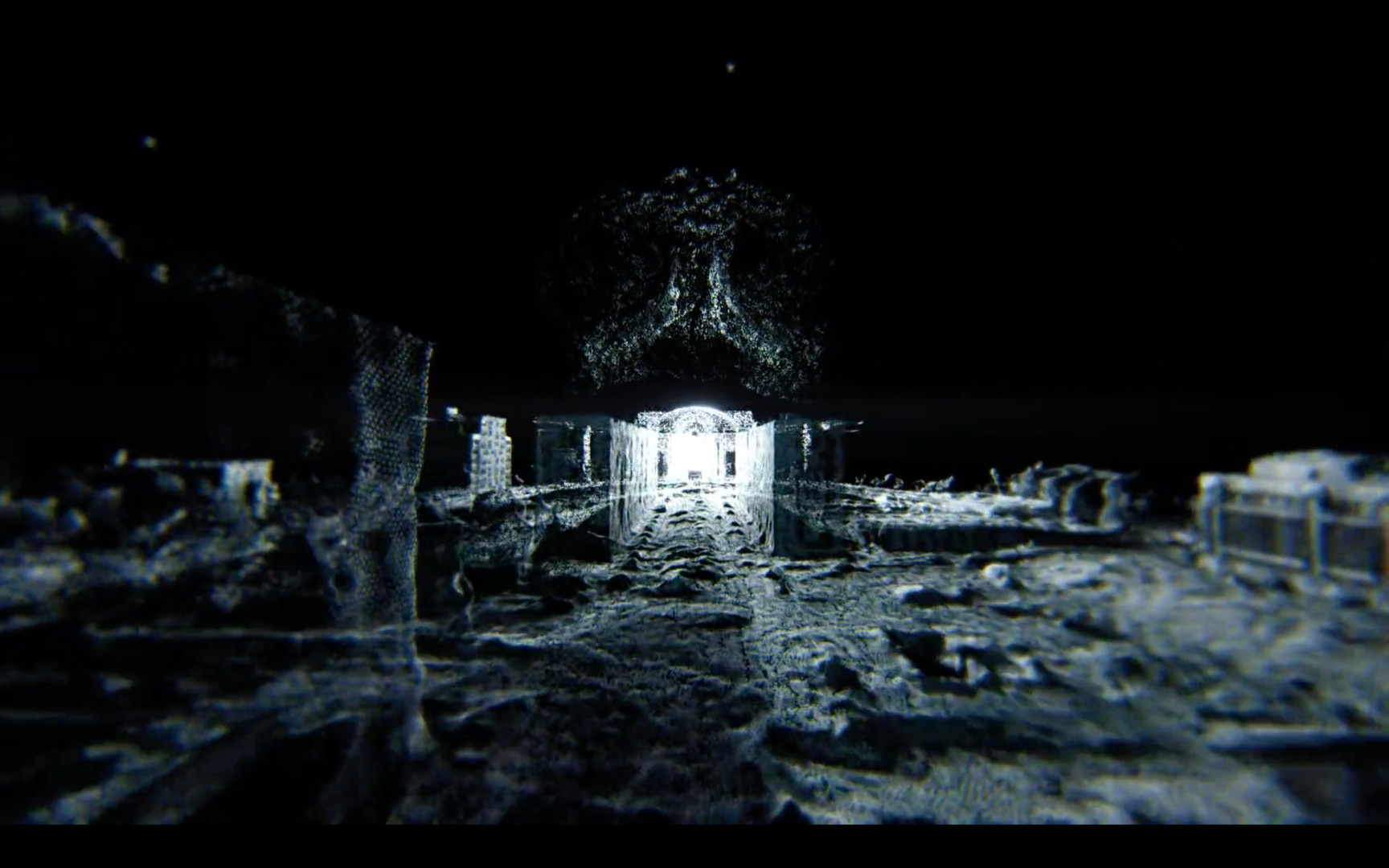 360FF: Initially, an installation was planned to accompany the work. The user had to lie in a bed. Will it see the light of day?
Dorian Rigal & Léon Denise: This installation is one of our strongest ambitions. It connects themes that are dear to us: water, dreams, travel. Before introducing it to the general public, we want to have experimented with it even more deeply. We continue to dream about this project.
360FF: What are the next projects?
Samuel Lepoil: Heterotopia is a permanent research. We want to continue to experiment around this topic, to listen to the public, and to listen to the work. Our desire for the rest of the project is to rediscover the sense of touch and live performance that originally guided our research. This device is centred on a theme, but carries within it several stories. It is up to us to discover them.